Nestled among trees in a park-like setting, the Good Shepherd Center provides an urban oasis for education.  Academics take place in our classrooms and out in the park, and lessons in community begin by simply walking through the door. 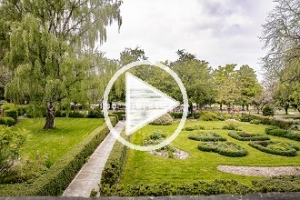 The lush green landscape of Meridian Park that surrounds the school is reminiscent of a country orchard. Enclosed by a tall hedge of holly and horse chestnut, the renovated playground incorporates art as thoughtful aesthetic features and feels like a secret garden. The expansive outdoor space (over 6 acres!) provides ample opportunity to move the classroom outdoors, and offers resources for creative play and physical activity – integral to promoting balance in our students’ lives. Meridian Park is home to Seattle Tilth’s teaching and demonstration gardens, as well as Wallingford’s P-Patch community garden. The Wallingford Farmers Market can be found in Meridian playfield every Wednesday, May through October. Click here to read more about the history of the Wallingford neighborhood and Meridian Park! 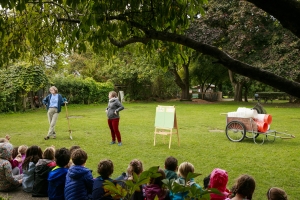 Spacious and welcoming, the historic Good Shepherd Center is home not only to Meridian but to more than two dozen community organizations and professionals such as the Wallingford Senior Center, Alliance Française, Washington Green Schools and the Tilth Alliance. This collaborative environment offers enriching interactions for students and faculty, and models the many ways in which we can learn from those around us. Click here to read about the history of the Good Shepherd Center!

Click on the link above to read about The Meridian School’s history, in full.

Perkins Elementary moved to the Good Shepherd Center. Classes were located in the main building. The school shared the gymnasium with Pacific Northwest Ballet.

Changed name to the Meridian School.

Nondiscrimination statement
The Meridian School does not discriminate in all aspects of employment and admissions because of age, sex, sexual orientation, gender expression, gender identity, race/color, ethnicity, national origin, creed, veteran or marital status, disability, or any other category protected by federal, state or local law.